It’s getting more expensive to buy a California Bank

California banks looking to sell are in rare company.

The state has long been a popular spot for M&A, with dozens of banks selling since the financial crisis. The number of banks based in California has decreased by 22% from mid-2015, to about 160 banks, according to the Federal Deposit Insurance Corp.

And there are even fewer banks based in the state’s most vibrant markets.

While M&A will likely continue, a dearth of targets could lead to elevated pricing or force some acquirers to look beyond California. Banks in the state that have agreed to sell this year received an average price equal to 197.4% of tangible equity, an increase from 180.8% in 2017, based on data from S&P Global Market Intelligence. 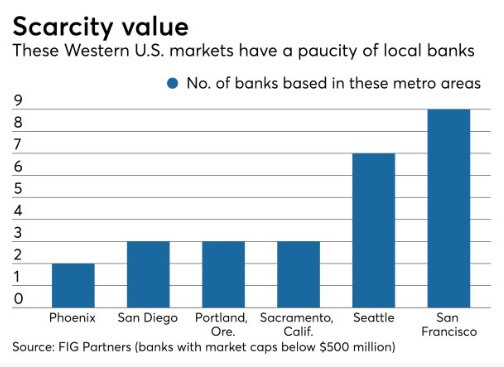 “M&A is very strategic,” said Mitch Razook, president and chief operating officer of RLR Management Consulting in Palm Desert, Calif. “Before, it was just get bigger and improve market share. Now it is very strategic in terms of the value an acquisition might bring.”

Eight California banks have agreed to sell themselves this year, a pace that would surpass the 14 deals announced in 2017, based on June 15 data from Keefe, Bruyette & Woods and S&P Global Market Intelligence.

CVB Financial in Ontario is California acquirer that has taken a more focused approach to M&A, President and CEO Christopher Myers said. Deals that worked in the immediate aftermath of the crisis may not make sense today.

CVB’s 2009 purchase of the failed San Joaquin Bank made sense at the time, given a loss-sharing agreement with the FDIC. The company, which unloaded about $250 million of the failed bank’s assets that didn’t fit its business model, prefers more precision with future purchases, Myers said.

The company agreed in February to pay $878 million for the $3.7 billion-asset Community Bank in Pasadena, Calif., its fifth deal since early 2009. The acquisition is among the biggest bank mergers announced this year by deal value.

Acquirers are carefully considering their needs, said Ruth Razook, CEO of RLR Management. That could mean looking at new niches and markets or finding cheaper deposits. Bottom line: It is about more than building scale.

“It is much more individualized by financial institution than it used to be,” Razook said.

Activity could pick up in certain markets, especially in urban centers where much of the economic growth is taking place, said Tom Hayes, a managing director in investment banking at D.A. Davidson. That has been the case in other parts of the country, including Denver, Atlanta and Houston.

“Buyers are looking to those markets to see if they can pick up quality franchises that either need a bigger balance sheet to grow or management teams are retiring,” Hayes said.

While the San Francisco area is a desirable market, with a population of roughly 6.8 million and a median household income above $100,000, it is home to only nine banks with market capitalizations below $500 million, based on data compiled by FIG Partners. Core deposits average 85% of the deposits at those banks, with an average cost of just 0.26%.

Southern California has more community banks, including 22 in the Los Angeles area.

That could make the region a stronger bet for consolidation, said Gary Tenner, an analyst at D.A. Davidson. While it has more potential targets, the market underperforms San Francisco in the amount of core deposits and the average cost of funding, according to FIG Partners.

“I think the greater Los Angeles area and Southern California will always be an area we would expect to see a good amount of activity,” Tenner added.

Overall, the number of targets is shrinking for consolidators.

To be sure, other factors have whittled down Myers’ wish list. The $8.3 billion-asset CVB, a commercially focused bank, is looking for sellers — usually privately held and family owned — that focus on small and midsize businesses.

“We’re getting later in the credit cycle,” Myers said. “Margins are getting tighter due to the flatness of the yield curve. There’s not a lot of risk premium built in for credit. I think you have to be careful about the bank you buy.”

“CVB is not the fastest-growing bank, nor does it have the highest net interest margin, because it is so conservative on credit,” said Tim Coffey, an analyst at FIG Partners. “However, the company is exceptionally profitable because it focuses on limiting expenses and generating revenues from other operations, such as trust revenues and maintaining service fees.”

There are other options for banks willing to look beyond California.

Acquirers that want to enter other Western markets, including Seattle, Denver and Portland, Ore., could face challenges thanks to a dearth of targets in those cities. That could force some banks to pursue institutions based elsewhere that have a few branches in a targeted market, or look at opening their own locations.

“There’s a scarcity value for quality banks in very good markets,” Hayes said. “In some of these markets with good long-term trends, there are one or two banks operating in those markets that are viable candidates. We’re seeing some real scarcity value.”